Building something powerful and dangerous probably lies in the nature of a man. Even (or especially) some MIT professors are passionate about powerful technical devices such as chain saws 🙂 And there’s also some competition on the internet in the world’s coilgun arsenal, where devices from all over the world are sorted and several parameters can be compared with others. One major aim is to gain good efficiency, which would be around 4%, while still keeping it portable. Some years ago I wanted to enter the heavy rifle class in this league and so this project was born. Just like its little brother, this coilgun was also accepted in world’s coilgun arsenal.


This device has been in the benchtop testing for a while and I’ve been working slowly but very persistently on it. You really need a lot of patience if you want to construct something like this. All coils and transformers are hand-wound and the capacitor banks consist of 106 small caps in total. You also have to be prepared to encounter difficulties along the way and probably even burnt parts and injuries if you aren’t careful. I would not recommend you to buid a multistage coilgun if you don’t have experience in electronis! Also, dangerous voltages and dangerous flying metal parts are involved, so bear this warning in mind!


This blogpost is a documentation of the construction process: 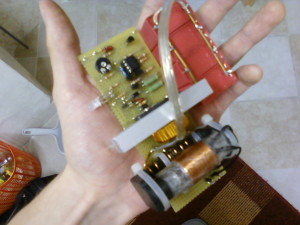 This is the capacitor charger the device is based on. The Idea and schematic for it came from uzzors2k. It is based on the Mazzilli Flyback Driver and has a lot of power and efficiency running off 12V. The secondary of the flyback transformer was re-worked with 4layers x 240 turns with 0.3mm enamelled copper wire. An adjustable coparator circuit turns the charger off when the threshold is reached. 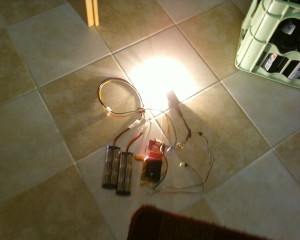 I liked this circuit so much that I’ve built 2 versions of it trying to make it more compact. Here is the socond one showing off its power: a 100W lightbulb enlightened gets pretty bright from the 14,4V NiMH batteries. 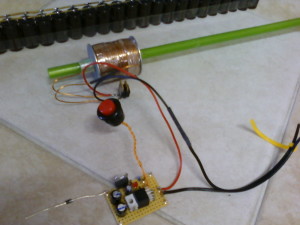 What we’ve got here is the first coil, its capacitor bank, the protection diodes and the triggering circuitry using 3 2N6509 SCRs in parallel with a 7805 for a 5V supply. The big red button is the trigger smiley


Coil data: I don’t quite remember the exact amount of turns, but it has to be something around 350 in 7 layers for the first stage, which makes the coil about 5 cm long when using 1mm wire and a cylindrical geometry. In the picture it has some more layers, which I removed in order to reduce resistance and increase efficiency when working with the chosen capacitor bank. The next coils get shorter and shorter with less and less turns for faster discharge, since all cap banks are the same size. The steel washers at each end of the coil are slotted to limit Eddy Currents.


Capacitor bank: I’ve found really cheap 68µF 400V electrolytic caps which come in packs of 10, so I’ve made banks with a total of 1088µF. They are capable of storing 87J of energy when charged to 400V.


Barrell: almost transparent PVC tube with thin walls and 10mm inner diameter, originally for aquarium purposes. The light beam gets through the material without holes.

This is the Coilgun in its current stage of construction.


All 4 coils are wound, the optical detection circuits (which are the same as in my pistol) are working, all 4 stages are cooperating quite well! 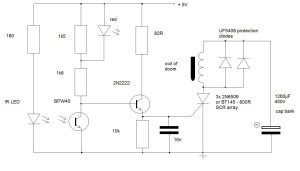 As you can see each stage has got its on bridge rectifier (consisting of 4x UF4007) and 330K resistor for slow discharge in case it doesn’t get activated. 2 cap banks have got neon bulbs installed to reliably detect that they are charged even if the power supply is disconnected. The other banks will be equipped with neon bulbs as well, as soon as I get a couple of them. 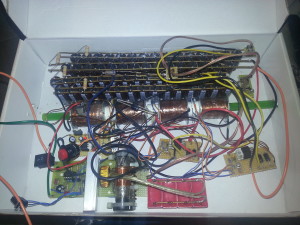 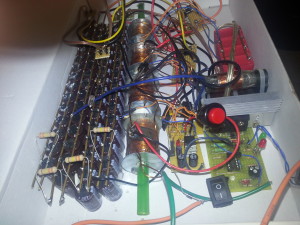 I know, I should not keep that thing that messy, because the danger of short circuits is high, but I’ll clean it up as soon as I’ve got the time.


The gun is ready to be installed into a rifle-shaped casing, but actually I’m playing with the thought of installing an additional fifth stage and add 340µF to each cap bank. This will result in 500J (!!) in total distributed on five stages. A worthy aim smiley.


The device has been fixed on 8mm plywood for safe benchtop testing. Also, a couple of videos have been recorded.


Every stage was upgraded with 340µF for a total of 400J! The improvement was not as good as I thought, but as soon as the chronograph is ready, some precise measurements have to be performed. Charge time is less than 10 seconds. 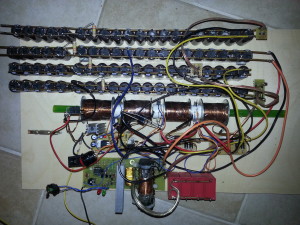 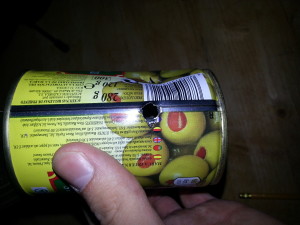 
Ok, since I had many spare capacitors and stuff for the photodetector circuits, I decided to add (yeah, right!) 3 more stages!! Upscaling is not a big deal if you keep following an approved concept.


The 5th – 7th stage were supposed to have coils with greater wire gauge (1.8mm) for further decreasing Ohm’s resistance and allowing for greater currents. Besides that a slightly different coil concept was followed in the “second half” of the coilgun: I decided to have fewer and fewer layers but increasing coil lengths to have the acceleration path increase and the pulse duration decrease to account for the fast accelerating projectile.


The fifth and seventh stage got me into some turbulences while testing the whole setup. The fifth coil shorted on two points on the steel washer, because the insulation layer got damaged there. This bug could be corrected easily though, removing the washer and using more epoxy. 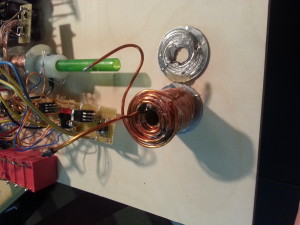 The seventh stage burnt the protected diodes (and some SCRs :() since i ran out of good ol’ UF5408 and had to use different ones. When the parts are replaced, the otherwise completed seventh stage will also work. Edit: since the protection diodes kept burning, I decided to use a smaller 50J bank with only 10 68µF caps and copletely leave the diodes. With a properly sized power dissipation resistor the smaller bank reaches its 400V when its bigger bros are done.


I think this device will not have more stages, because it is dedicated for portable use some day and therefore any more increase in in size is kind of making it inpractical. 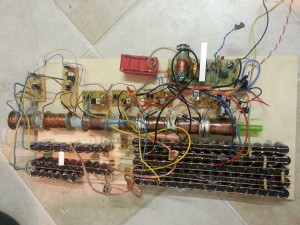 An idea that came to my mind is simply usind a DC motor with a small neodymium magnet for projectile rotation which is supposed to stabilize its trajectory. I’ve added PWM speed control to it so that it doesn’t spin too fast to stick to the projectile. Whether or not the trajectory of the bullet is affected by this concept remains to be tested over longer firing distances of, say, 10m. 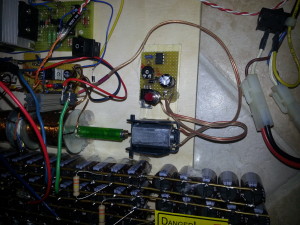 
The guts have been built int an enclosure, finally. It consists of PVC for the most part and is held together using Tangit, which is an adhesive that welds this kind of plastic together. Only the casing of the charging circuitry is made of ABS, which sticks to PVC using the same glue though. Well, and the enclosure of the acceleration unit is a PP pipe which had to be screwed to the remainder as it is not affected by the solvent of the glue at all.


These are the final banks that will be used: 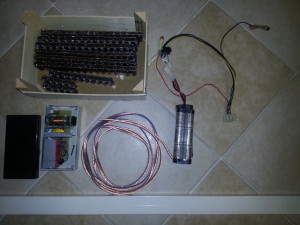 Below you can see the standard polypropylene pipe that will house the coils and light traps. The coils have been wrapped with sheet iron. Some authors claim improvement of performance. The diode bridge rectifiers and switching circuits will be built into a 40mm wide PVC cable enclosure at the bottom of the device. 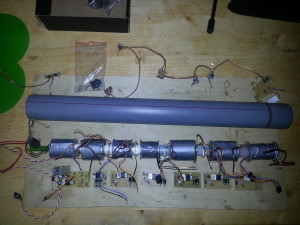 The cap banks for the first 6 stages are hidden in the double compartment shaft, the triggers and rectifiers are mounted below. The grip is a Nintendo Wii gun shaft for the Wii remote. It seems to be derived from the Walther P99 and is just incredibly ergonomic. It was just slightly trimmed, equipped with a reset switch from a computer and screwed to 2 massive PVC brackets that have been glue-welded to the PVC main shaft and we’re done. 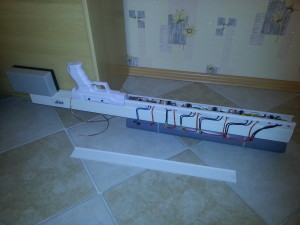 The cap bank, trigger circuit, rectifier and power dissipation resistor have been built into another piece of PVC cable enclosur and mounted to the side, since I didn’t want the finished device to exceed 1 meter in length. 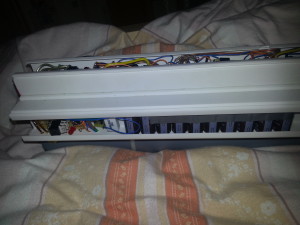 The battery housing was formed from the remainder of PVC profile that I had. The battery packs are held in place with Velcro strips. 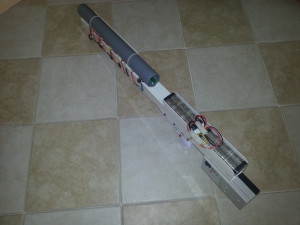 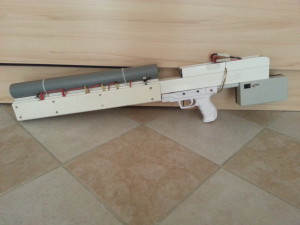 And of course, some words on safety precautions are appropriate, especially if one owns a DIY laser-engraving CNC machine 😉 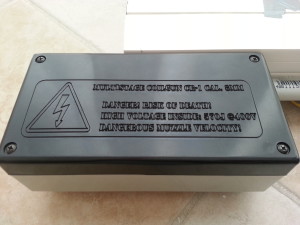 
the first 6 stages have capacitor banks with 16 caps à 68µF which store 87 Joule each when charged to 400V. The seventh stage’s capacitance is only 680µF which makes 50J @ 400V. Some power is dissipated through a 6k 5W resistor to make sure that after the same amount of time all stages have the same voltage. The overall stored electrical energy for all 7 stages is 572J. Charge time at 14.4V is below 10s.


A big screwdriver bit weighs almost exactly 10g. With a calibrated ballistic chrono a velocity of 50m/s was determined which results in a muzzle energy of 12.5J.


So overall efficiency is 2.1%