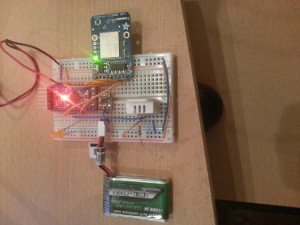 This page provides some guidance on how to set up a wifi connection between an Android device and a minimalistic arduino-based server. The wifi chip used in this project is the CC3000.


Tutorials on how to get the CC3000 to work with the Arduino are all over the WWW, what I would like to add is an example on how to have the Arduino talk to a smartphone or similar.


The communication protocol used here is Telnet. The data comes from a DHT22 sensor which measures humidity and temperature. Actually this is an extended mashup of the open home automation and the candy bowl project. The Android App uses client sockets to communicate to the arduino, which operates in server mode.