I’m using the Attiny85 quite a lot, especially since it’s programmable via the Arduino IDE. I like programming the AVR chips over an ISP programmer (USBtinyISP or USBASP). That way there’s no need for messing around with bootloaders.


After building a pogo pin adapter for the standard Atmel 6-pin ICSP header I needed a handy and tiny breakout board for some chips because I was tired of building the same circuit again and again and so this project was born. It contains all the essentials to be able to handle the Attiny85 in a SOIC-8 package conveniantly, such as reset pullup resistor, decoupling capacitors and an LED on PB0 (PWM pin). It’s tiny and can be left in small projects or used on a breadboard. 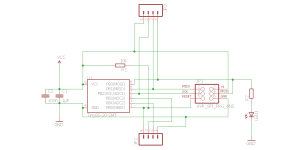 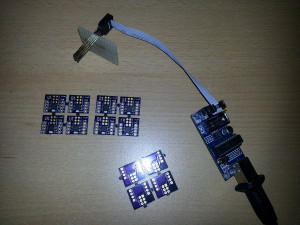 The eagle files can be found here:
Attiny85breakout